KDA v. Sazerac – Who Gets To Be On The “Kentucky Bourbon Trail®” Or Public Television?

As more and more people become interested in Bourbon and want to experience the living histories of Kentucky’s Bourbon distilleries, they might visit the “Kentucky Bourbon Trail” website (link here) to plan their visit.

In the course of planning their trip along the Kentucky Bourbon Trail, they might wonder why Buffalo Trace, with all of its venerable history, isn’t included on the Trail or the map: 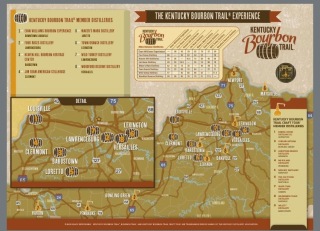 The answer is as simple as understanding that members can benefit from participating in a trade organization.  The Kentucky Distillers’ Association (“KDA”) is a trade organization made up of member distilleries, which traces its roots back to 1880 when distillers banded together to reduce whiskey taxes and to protect the industry.  The group disbanded during Prohibition, but reformed in 1935 to assist with repeal efforts.  According to its website, the KDA is a non-profit organization with a mission “to protect the trade interests of the industry whenever they may be threatened and to handle common problems in a concerted action.”
The KDA created the Kentucky Bourbon Trail in 1999, at a time when the owner of Buffalo Trace, Sazerac Company, Inc., was a member of the KDA.  Anyone who toured Buffalo Trace between 1999 and 2009 might have noticed Kentucky Bourbon Trail trademarked logos and advertisements, and might have even had their Kentucky Bourbon Trail “passport” stamped at Buffalo Trace to memorialize their visit.
This all changed at the end of 2009, however, when Sazerac terminated its membership in the KDA (Click here to view the December 31, 2009 letter) and then, according to a complaint filed by the KDA against Sazerac in April 2010 in federal court in Louisville, it tried to keep using the Kentucky Bourbon Trail trademarks (Click here to view the Complaint).
Trademark protection has been a recurrent theme in Bourbon litigation, and is a frequent subject of my posts.  While many of those cases arose very early in the development of trademark rights, it’s probably indisputable that trademark rights are well-understood by today’s sophisticated corporations, Sazerac included.  Worse for Sazerac, according to court filings, as a KDA member, “Sazerac participated in the creation and development of the KDA’s promotion and tourist attraction, the KENTUCKY BOURBON TRAIL®, including the creation and adoption of the mark ‘KENTUCKY BOURBON TRAIL®.’”  Buffalo Trace was even one of the first members of the KDA’s promotion and tourist attraction.
Between 1999 and 2009, when Buffalo Trace used the KDA’s trademark for the Kentucky Bourbon Trail on its website, it used the standard acknowledgment that the KDA owned the trademarks.  But then, after Sazerac left the KDA, it kept using the Bourbon Trail name albeit slightly revised to “Buffalo Trace Distillery on the Bourbon Trail,” it tried to register that as a trademark (along with a similar trademark for its Tom Moore Distillery), and it even tried to cancel the KDA’s trademarks.
The case never went to trial, and instead the parties settled, so the case was dismissed in November 2011.  While the terms of the settlement were not released (the Order that the parties prepared for the Court stated simply that all claims have “been resolved and settled to the mutual satisfaction of the parties” – Click here to view), a review of today’s Buffalo Trace website can give us a hint about the result:  neither the “Kentucky Bourbon Trail” nor “Buffalo Trace Distillery on the Bourbon Trail” are anywhere to be seen.
If there were any smoldering embers of the dispute between the KDA and Sazerac, they might have been fanned last week when a prominent whiskey writer complained about the new Bourbon documentary which aired on Kentucky Educational Television (“KET”) earlier this month.  The documentary, “Kentucky Bourbon Tales; Distilling the Family Business,” aired to much acclaim.  For those who missed it or are outside of Kentucky, you can find it at this link: Kentucky Bourbon Tales.

Kentucky Bourbon Tales was produced by the Louie B. Nunn Center for Oral History and was funded by the KDA.  I’ve linked to the Louie B. Nunn Center interviews for other posts, including great information related to Buffalo Trace.
As the subtitle “Distilling the Family Business” indicates, the focus of the documentary is people who grew up distilling and handed down Bourbon tradition generation after generation.  The Beam family (stretched far wider than Beam Suntory), Wild Turkey with Jimmy and Eddie Russell, Heaven Hill (still a privately-owned company), Brown-Forman, Four Roses with nearly 50 years of Jim Rutledge working his way through Seagram’s and finally bringing the brand back to prominence, were all featured.
Buffalo Trace – which I’ve written about extensively and which I’m personally a big fan of – wasn’t mentioned, nor were two other distilleries owned by Sazerac.  Maybe that was because those distilleries did not fit into the “Distilling the Family Business” framework due to their changes in ownership and lack of family lineage for Master Distillers.  But, of course, since Sazerac voluntarily decided to abandon the KDA, it’s reasonable to conclude that’s why the Sazerac distilleries were not included in a KDA-sponsored production.  Is there a problem with that?
I didn’t think there was anything wrong with excluding a non-member who didn’t pay any dues that would have supported the documentary, so I was surprised to read criticism that the documentary hid an “ugly secret” of a “petty commercial dispute,” and even more surprised to read the claim that the KDA was “lying,” and the pronouncement that KET and the University of Kentucky “should be ashamed of themselves for their complicity in this charade.”  So far as I know, Sazerac has not complained about the KET documentary; it’s just coming from one writer.
Sazerac itself probably hasn’t complained because there’s no “secret” (let alone an “ugly” one) about the membership of the KDA, and trademark infringement is no “petty” matter.  I’m not sure that anyone really thinks that Sazerac should have been given the benefit of a production financed by the group that it spurned, and from which, according to the court documents, it tried to appropriate the Bourbon Trail trademark.  Personally, I’m glad that we’re not going down the road of socialized television.  Sazerac is thriving  and is happy to take care of its own marketing, and the KDA is doing a great job for its members.  Let’s just all enjoy our Bourbon in harmony for the New Year, and not root for a Round Two of the KDA v. Sazerac lawsuit.

2 Comments on “KDA v. Sazerac – Who Gets To Be On The “Kentucky Bourbon Trail®” Or Public Television?”