Just after the Civil War, at the intersection of the former Southall St. (later changed to Reservoir Ave. in 1884, and now Mellwood Ave. since 1895) and the Louisville and Shelbyville Turnpike (now Frankfort Ave.) in Louisville, two blocks from the where the Albert A. Stoll Firehouse (now The Silver Dollar) would be built decades later in 1890, the Mellwood Distillery was founded on the South Fork of Beargrass Creek.  The distillery is reported to have been an impressive Richardsonian Romanesque building, but I could not find any pre-prohibition pictures through the University of Louisville online archives, and National Historic Registry documents for the Clifton Historic District did not include any photographs, either, so here’s a picture of the Albert A. Stoll Firehouse from the mid-2000’s, before its renovations:

The Mellwood Distillery is historically significant because it filed one of the first lawsuits against a competitor who lied on its label about having a distillery (and who also tried to imitate the Mellwood brand).
As described in Mellwood Distilling Co. v. Harper, 167 F. 389 (W.D. Ark. 1908), the name “Mellwood” was actually an accident.  It was founded by George W. Swearingen (circa 1837 – 1901), a Bullitt County farmer who, after graduating from Centre College in 1857, ran a small still on his family farm, which he called “Millwood.”  After the Civil War, Swearingen moved to Louisville and opened a distillery, intending to name it “Millwood” after his old farm, on the border of what are now the Clifton and Butchertown neighborhoods.  But when he ordered his brand, its name was misspelled as “Mellwood.”  Swearingen decided to keep it anyway, and in 1895 this brand mistake found permanency when Reservoir Ave. was renamed Mellwood Ave. in honor of the Mellwood Distillery, which had grown to occupy both sides of the street for nearly an entire block.
This 1884 map shows the expansion of the Mellwood Distillery across both sides of then Southall St: 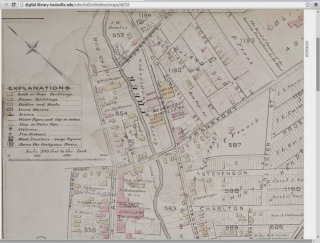 Even greater expansion was evident by 1905:

Credit to Broken Sidewalk for finding this 1905 Sanborn map via KYVL.
https://brokensidewalk.com/2014/mellwood-bourbon/

Swearingen sold his distillery in the late 1800’s, and after he sold, it appears to have become part of the infamous Whiskey Trust (Kentucky Distilleries and Warehouse Company) in 1899.  Having made his fortune, Swearingen stayed out of the distilling business, and focused instead on real estate (as president of the Kentucky Title Company) and banking (as founder of the Union National Bank).

As the Mellwood Distillery continued to experience great success, it attracted an imposter and led to one of the earliest court rulings on false labeling and fake distilleries.  The imposter was the Harper-Reynolds Liquor Company, a distributor in Ft. Smith, Arkansas.  Harper bought blended whiskey and bottled and labeled it as “Mill Wood,” used the name “Mill Wood Distilling Co.,” used a picture of an extensive distillery on the label, used “Kentucky” on the label, and included this description on its label:
This celebrated whiskey is made exclusively by the sour mash fire copper process, employed only in the distillation of the finest whiskeys, from carefully selected grain, and bottled only after being matured in barrels for 8 years.
The evidence, however, showed that there was no “Mill Wood Distilling Company” in Kentucky or elsewhere, that the whiskey was a blend, that it was not handmade, sour mash or made by the fire copper process, that it was not made from the carefully selected grain, that it was not aged for 8 years, and that no such distillery existed as shown in the picture on the label.  The court ruled that Harper used this false label “to mislead the public into the belief that in purchasing the ‘Mill Wood’ brand of whisky they were purchasing [Mellwood] whisky,” and it issued an injunction against Harper.
Unfortunately, the Mellwood Distillery was one of the many casualties of Prohibition.  It closed in 1918, reopened after Repeal as General Distilling Company, and continued to produce the Mellwood brand, along with bulk whiskey sales.  After General Distilling closed in the 1960’s, the handful of buildings that survived through Prohibition seem to have been demolished in the 1960’s and 1970’s.  It’s also a shame that there is no good photographic record of the distillery (although I’m continuing to look).  This 1921 picture is described in the U of L archives merely as a stretch of Mellwood Ave. from Frankfort Ave. to Brownsboro Rd., which is precisely the block where the Mellwood Distillery was located, so this must show the distillery property, albeit during Prohibition. 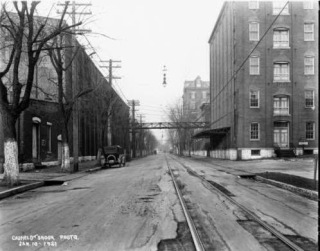 Photograph credit:  Image No. ULPA CS 034548 in the Caufield & Shook Collection, University of Louisville Photographic Archives, Louisville, Kentucky, accessed at: http://digital.library.louisville.edu/cdm/singleitem/collection/cs/id/830/rec/1.
Additionally, this 1936 picture is described by the U of L archives simply as an “Alley between Mellwood & William,” without noting that it appears to also show the back side of the Mellwood Distillery (by then General Distilling) property: 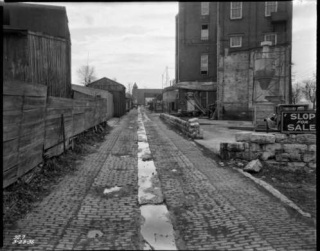 Maybe just one forgotten building remains from the Mellwood Distillery, as mentioned in Broken Sidewalk’s republication of this post:

Credit to Broken Sidewalk for comparing the 1905 Sanborn map to a current aerial view.
https://brokensidewalk.com/2014/mellwood-bourbon/

Like the Mellwood Distillery itself, it also appears that part of the legal significance of Mellwood Distilling Co. v. Harper has been forgotten.  Bottles today list fictitious distilleries by using assumed names, which is fine.  But some brands pretend that they distilled the contents.  The latest example might be Duke Bourbon, which claims on its label to be “Distilled By Duke Spirits, Lawrenceburg, Kentucky.”  Duke Spirits claims on its Twitter profile to be “an artisan distiller crafting small batches of superior bourbon…”  However, Duke Spirits is not located in Kentucky, it is not an assumed name of any Kentucky distillery, and the entity is not even registered to do business in Kentucky with the Secretary of State.

* Updated Dec. 15, 2014 to include this image of a circa 1900 Lithograph of the Mellwood Distillery property provided by reader Fred K.  Thanks Fred!

It had always stunned me that there weren’t any readily-available photographs or drawings of the Mellwood Distillery, but thankfully Janet Borgerding Murphy, granddaughter of Walter L. Borgerding, read this post.
Walter was president of General Distillers, which reopened and renamed the Mellwood Distillery after Repeal.  General Distillers was well-known for making bulk sales and selling its own brands such as Old Pot Still, Derby Town, Old Kentucky General, County Chairman, Kentucky Nectar, and others, as well as for bottling dozens of other brands that have since been lost to history, including Live Oak, Rosewood, Old Boone, Golden Ribbon, Golden Years, Old Saddler, and Quality Street, some of which were distilled by famous distilleries such as Stitzel-Weller and the K. Taylor Distillery.
Janet sent historical documents to me showing why the Mellwood Distillery was mostly lost to history.  The Mellwood Distillery and the adjacent Crystal Springs Distillery were casualties of Prohibition, and without any hope of reopening, in 1921 the new owner of the property demolished Crystal Springs, removed all machinery and gutted the piping and equipment from the Mellwood distillery room, fermenting house, and bottling house, and demolished all warehouses except one.  The property then sat abandoned.
Although steps to reopen began in 1933, due to the dilapidated condition of the property and the necessity of installing all new equipment, it took until December 13, 1935 before General Distillers was able to fill its first barrel.  The renovations by General Distillers proved to be the source of the only known complete photograph of the Mellwood Distillery:

Granted, this photograph was taken after its closure and abandonment, but its imposing stature can help us all envision the former grandeur of the Mellwood Distillery.  Sadly, the less ornate sensibilities of mid-1930’s Modernism influenced the renovations by General Distillers, resulting in the removal of the Richardsonian Romanesque lines, peaks, and ornamentations:

While the new design rejected earlier decorative architectural styles and embraced pure functionality and the ongoing industrial revolution, General Distillers simultaneously touted its adherence to old-world bourbon-making techniques, its deep limestone well, and the connection of its master distiller to legendary pre-Prohibition distillers.  All of the effort by General Distillers was ultimately for naught since it operated only for a few decades before closing and being demolished, but at least the Borgerding family kept a piece of history.
Tremendous thanks and photo credit to Janet Borgerding Murphy; all rights reserved.