I was inspired to review these after attending a Smooth Ambler tasting in September with John Foster, Director of Sales and Distiller at Smooth Ambler in Maxwelton, West Virginia.  He was a breath of fresh air in the often secretive and sometimes deceitful world of sourced whiskey, or, as Smooth Ambler calls it, “merchant bottling.”  John took us through a tasting of Smooth Ambler Yearling, a 1.5 year old wheated Bourbon, a 7 year old high-rye Bourbon sourced from MGP, a 10 year old low-rye Bourbon sourced from MGP, a 7 year old rye whiskey sourced from MGP, along with vodka, gin and a barrel-aged gin.  To top off all of those, John pulled out a sample bottle of the highly-anticipated “Contradiction,” a blend of 73% of 9 year old MGP high-rye bourbon with 27% of Smooth Ambler’s 2.5 year old wheated Bourbon.
Smooth Ambler started with the goal of distilling and selling vodka and gin while waiting for its Bourbon to age.  Realities of business, however, led Smooth Ambler to also become a non-distiller producer (“NDP”) for some of its current product line.  So unlike many NDPs who don’t distill a drop, Smooth Ambler is busy both distilling and aging its own product, as well as sourcing Bourbon from MGP in Lawrenceburg, Indiana.  Many small craft distillers simultaneously sell sourced and produced spirits, but Smooth Ambler is different because of its scale, perhaps only being topped by Willett among brands that both distill and source (Willett just got there in the reverse direction).
Smooth Ambler is also honest about the contents and provenance of its Bourbon.  Smooth Ambler freely discloses and distinguishes between what they distill and what they source.  There are no secrets about the mash bills and there’s no pretending that they found their pre-Prohibition family recipe.
I had picked up bottles of the 7-year and 10-year this past summer in Michigan (which by their batch numbers and bottling dates appear to have sat on the shelf for a year), but I hadn’t opened either one yet.  I enjoyed the tasting so much that I picked up the eight-year Single Barrel that night, and I decided that it was high time to put them to the test.  I like the proof of these three options, I like that they’re not chill-filtered, and I like that they’re in a sweet spot for aging.  With all of these things done right, let’s just hope that the Bourbon passes muster.
Here are the three, ordered by proof:
Smooth Ambler Old Scout 7-year Straight Bourbon Whiskey
Distillery:  Sourced from MGP; Batch 30 bottled 5-29-2013
Mash Bill:  60% corn; 36% rye; 4% malted barley (MGP high-rye recipe)
Age:  7 years
Proof:  99
Cost:  $41.99
The color is deep copper trending toward light brown.  The nose is strong on rye and black pepper spice, but is balanced with caramel, slight oak, and a little mint.  The nose has great subtle flavors and is really pleasant.  Caramel and vanilla sweetness are the first tastes, but that quickly transitions to nice blast of rye, tea and pepper.  Right away you can tell that this is a remarkable Bourbon.  The medium-length finish is very warm, dry and lingering.
Smooth Ambler Old Scout 10-year Straight Bourbon Whiskey
Distillery:  Sourced from MGP; Batch 4 bottled 6-10-2013
Mash Bill:  75% corn; 21% rye; 4% malted barley (MGP low-rye recipe)
Age:  10 years
Proof:  100
Cost:  $56.99
Interestingly, the color isn’t any different than the 7-year, which I expected given the extra time and lack of chill filtering for either.  The most noticeable differences in the nose include clear oak and corn sweetness replacing the rye spice, but it also had nuanced scents of clove, pear, honey and an old empty tobacco barn.  My first taste seemed a little hotter than 100 proof, but the heat mellowed to warmth with a little air.  The taste also has buttered corn sweetness, cocoa, roasted nuts and caramel.  I had hoped for a longer finish, but it has nice warmth and ends with a little mint.
Smooth Ambler Old Scout 8-year Single Barrel Straight Bourbon Whiskey
Distillery:  Sourced from MGP; Barrel 904 bottled 9-16-2014
Mash Bill:  60% corn; 36% rye; 4% malted barley (MGP high-rye recipe)
Age:  8 years
Proof:  119.8 (barrel proof)
Cost:  $47.99
The color is essentially the same as the other two, which again puzzled me since no water was added to this one to reduce the proof for bottling.  I literally put all three in front of a light and the differences are miniscule, if there’s any difference at all.  The nose is very similar to the 7-year, although the higher proof is absolutely noticeable, and it adds scents of leather and maple syrup to the rye and black pepper spice.  The taste is partly an amped-up version of the 7-year, but it’s mostly different because of the higher proof burn.  There’s also less of a “pop” of the rye spice, and more of an even spread of the spice.  The 8-year had a similar finish too, and while the burn from the higher proof lasted longer, the flavors didn’t necessarily last as long.

Bottom Line:
While my clear favorite was the 7-year, go out and buy any of these.  If you prefer more oak flavors coupled with more sweetness, then the 10-year will be your choice.  But if you prefer the spice and dryness that comes with MGP’s high-rye Bourbon mash bill, you’ll prefer the 7-year or the 8-year.  There’s also less oak flavor in those two than I expected, but I didn’t miss it.
Scores on The Sipp’n Corn Scale
Smooth Ambler Old Scout 7-year:   4.0
Smooth Ambler Old Scout 8-year:   3.5
Smooth Ambler Old Scout 10-year: 3.0
The Sipp’n Corn Scale:
1 – Wouldn’t even accept a free drink of it.
2 – Would gladly drink it if someone else was buying.
3 – Glad to include this in my bar.
4 – Excellent bourbon.  Worth the price and I’m sure to always have it in my bar.
5 – Wow.  I’ll search high and low to get another bottle of this. 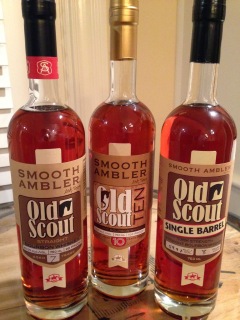