As the 2017 Kentucky Bourbon Affair (June 6-11) draws near, I was reminiscing with friends about last year’s event, where I started by going in-depth at Four Roses, tried pre-prohibition T.W. Samuels the following evening, and wrapped up the next day by shooting skeet with Eddie Russell at Wild Turkey. 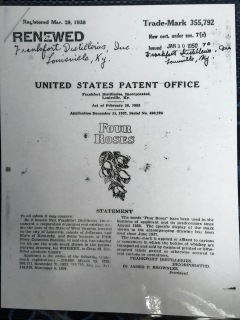 On the Four Roses trip, Al Young was our surprise MC for the bus ride from Louisville to Lawrenceburg.  He regaled us with Four Roses stories from the past 50 years and passed around historical documents for the research fanatics amongst the group.  It made the short trip pass even faster, and before we knew it, Brent Elliott was greeting us for a Q & A session followed by an in-depth tour of the distillery.  We learned every step of the distillation process, and could see the planned expansion taking shape.

After lunch and a tasting of Yellow Label, Small Batch, Single Barrel, and Elliott’s Select Limited Edition guided by Brent, I had the chance to get into the weeds with him about the use of other yeast strains and citric acid, which he said was the first time he’d ever discussed those issues with a consumer.  Then we all headed to Cox’s Creek for a demonstration of the barrel dumping and bottling facility, along with a tour of their unique single-story warehouses. 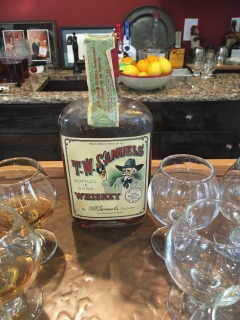 The next day, after another trip to Four Roses with the Mellow Moments group and getting the first opportunity to buy a bottle of Elliott’s Select Limited Edition, my wife and I, along with several friends, headed out to Rob Samuels’ home for dinner and a tasting of century-old T.W. Samuels.  Rob’s hospitality rivaled his father’s (in 2015 I went to a crab and crawfish boil at Bill, Jr.’s home with the Bourbon Affair; read about it here), and we heard Rob’s perspective on growing up in the Maker’s Mark world, the development of Maker’s 46, and the Maker’s 46 private barrels that were just starting to be released.  But the focus of the Bourbon tasting was taking a sip through time with a 1917 bottle of T.W. Samuels made by the Samuels family long before the Maker’s Mark brand existed. 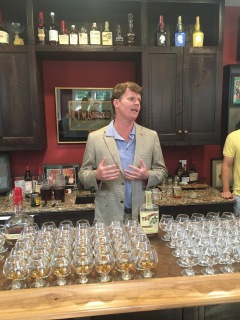 Legend has it that Bill, Sr. burned the old family recipe when he struck out on his own to form Maker’s Mark, and if this 1917 bottle represented the old recipe, then Bill, Sr. did us all a huge favor.  While maybe we can blame oxidation over the passage of time, “wet cardboard” is the best way to describe this old whiskey.  I had to cleanse my palate and get back to Maker’s 46 ASAP. 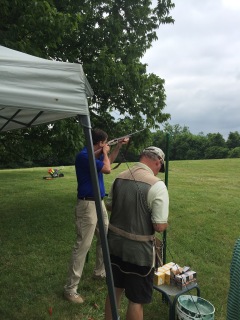 Last but not least, Wild Turkey was an absolute blast, literally.  This event was perfect for me to bring along a great friend and client (who inquired into whether he could bring his own shotgun).  We had expert marksmen guide us through skeet shooting, and teach us the finer points of the sport.  After an in-depth tour of the distillery led by Eddie Russell, we were treated to lunch with Jimmy and Eddie, along with a guided tasting of Diamond Anniversary, Master’s Keep, and Decades before heading home. 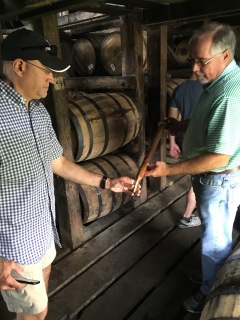 If standard 30 minute tours leave you wanting more, check out the 2017 Kentucky Bourbon Affair, and you won’t be disappointed.