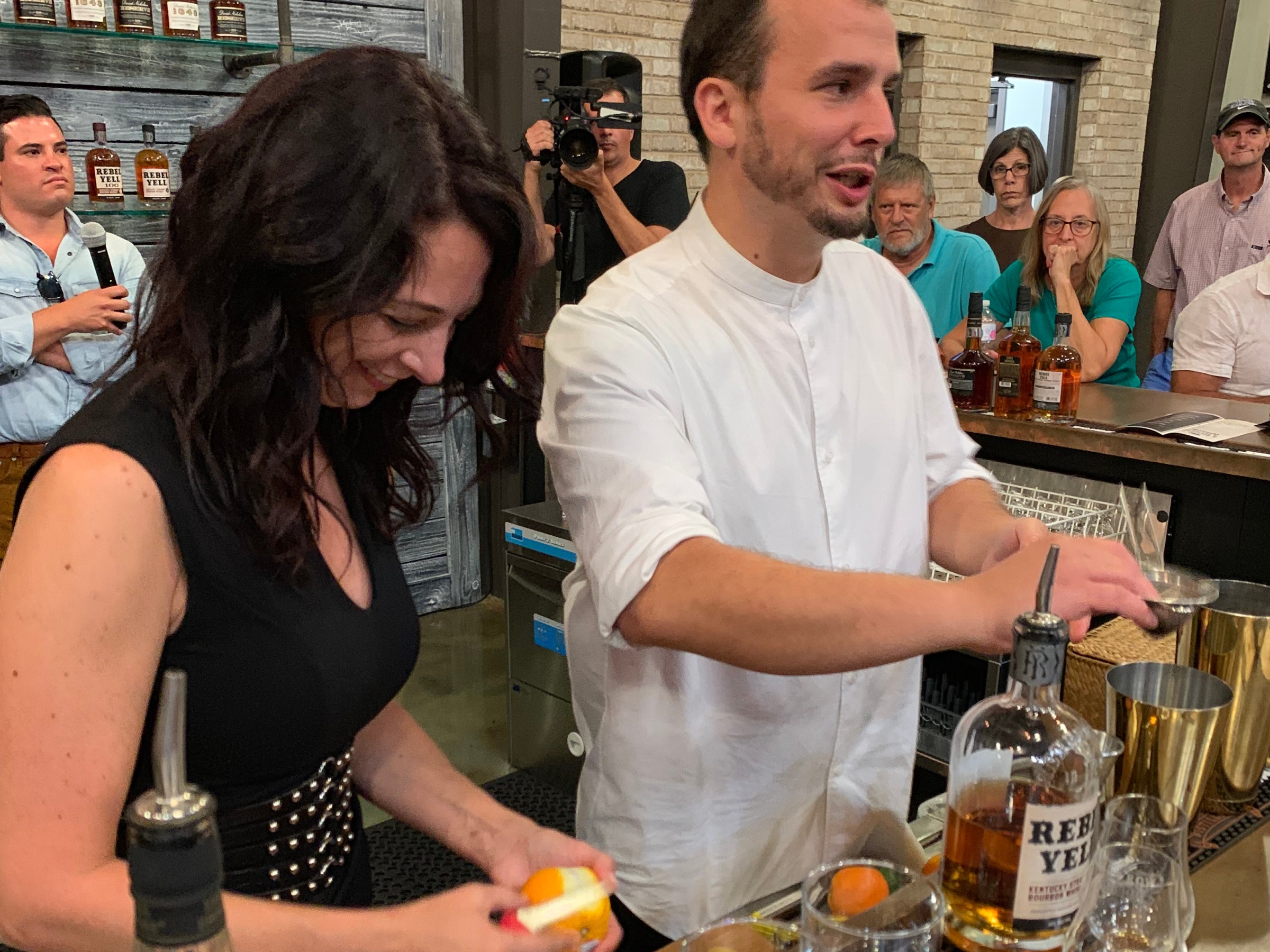 On September 18, 2019, six semifinal winners from across the United States and the European semifinal winner converged on Lux Row Distillers in Bardstown, Kentucky, for the Championship of the Bourbon Battle Cocktail Competition.

These mixologists were challenged to create original bourbon cocktails crafted with either Rebel Yell or Ezra Brooks, and they competed in live events from May through July.

The regional champion contestants were:

Naomi Roquet, St. Louis, with the “Millions of Peaches” (bourbon, peaches, and mint are perfect together).

Giacomo Ciminello, Cincinnati, with “Three Ways to Midnight” (evoking Cincinnati-style chili even to the point where it was garnished with shredded Gjetost cheese).

Brock Schulte, Kansas City, with the “We Jammin’” (so insightful with dual acids and texture).

Jake Smith, Louisville, with the “Kentiki Masala” (a pinch of Garam Masala makes this cocktail the most creative without being weird).

Marie Teckmyer, Cleveland, with the “Down the Rabbit Hole” (Marie’s a story-teller and this was the most refreshing cocktail of them all).

Mike Pendergast, London, England, with “If you Don’t Dance, Then Sit Down” (my overall best cocktail of the first round).

As a judge for the Championship, I was asked to score each cocktail based on appearance, aroma, creativity, taste, and overall impression.  Each contestant had seven minutes to prepare the cocktail that got them here.  For me, Marie and Mike unquestionably had the best cocktails in the first round.  They advanced along with Brock and Naomi.

Round Two had each contestant prepare a second cocktail of their own creation.  I was blown away by Brock’s second cocktail, which he named “(W)risky Colada” that again used dual acids (pineapple and lime), a splash of apple cider, and was topped with coconut cream.  I also loved Marie’s second cocktail, named “Kettle Popcorn Milk Punch a/k/a ‘Dancing With Myself.’”  From her base of Rebel Yell, to her homemade butter corn cream, the creative addition of sweet potato Soju, and a Billy Idol leather bracelet around each glass, Marie absolutely nailed it.

Both Naomi and Mike made a pretty boozy cocktail, although both were certainly still solid.  Naomi’s was pure dessert, like a chocolate hazelnut torte, but too boozy.  Mike’s smelled like a lemon drop candy and the flavors were balanced by toasted pecan bitters, but I was sure that Brock and Marie were advancing.

I was only half right.  After the votes were tallied, Marie and Mike advanced to the final round, which was done “Chopped” style.  Each contestant received a sealed box of surprise ingredients and they were given seven minutes to craft a new cocktail on the spot.  The pressure was palpable!

Marie and Mike enjoyed each other’s company (and stress) as they devised their plans, even sharing a cutting board.  As Marie emptied her basket, checking out each potential ingredient, she remarked “Oh, I like that” under her breath when she found the coffee liqueur.  Her plan was taking shape.  With Ezra Brooks, a little bit of dry vermouth, and orange zest, Marie created “The Wake Up Call.”

Mike went for Rebel Yell along with two of the safest bourbon cocktail ingredients in existence—blackberries and mint—with crème de banana, sweet and dry vermouth, and Angostura bitters to create what he named “Crème de Banan-hattan a/k/a Brass Tacks Truth” (it’s hard enough to create a cocktail under pressure, let alone come up with a name…).

It was an incredibly close vote, but we crowned Mike the 2019 Champion of the Lux Row Bourbon Battle.  As the Bourbon Battle Champion, Mike won a private barrel selection with Head Distiller John Rempe that he’ll receive with a custom-made label.

The creativity was off the charts for all the contestants.  The variety and uniqueness of the ingredients created aromas and flavors that you’ll never find if you stick to tried-and-true cocktails.  So be adventurous.  Try new bourbon cocktails.  Talk to these masters behind the bar.  And prepare to be amazed. 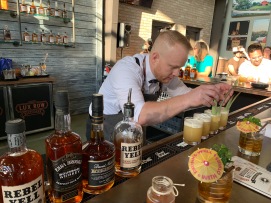 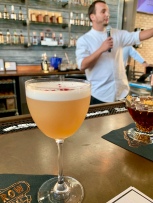 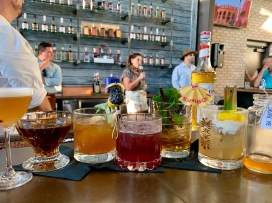 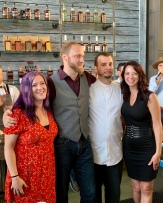 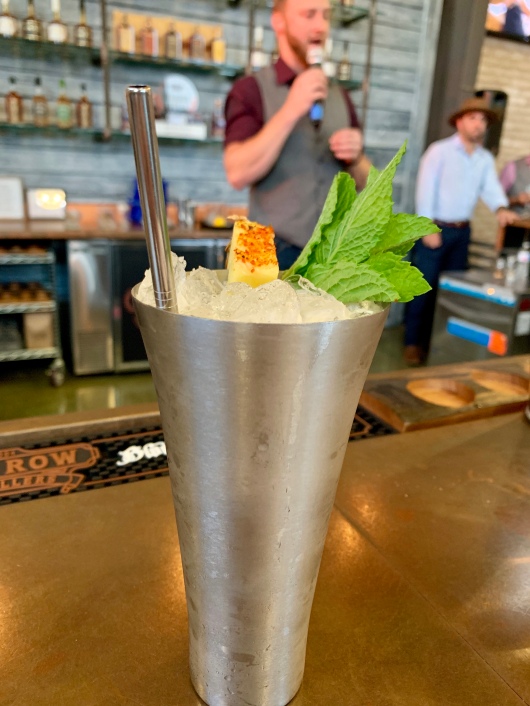 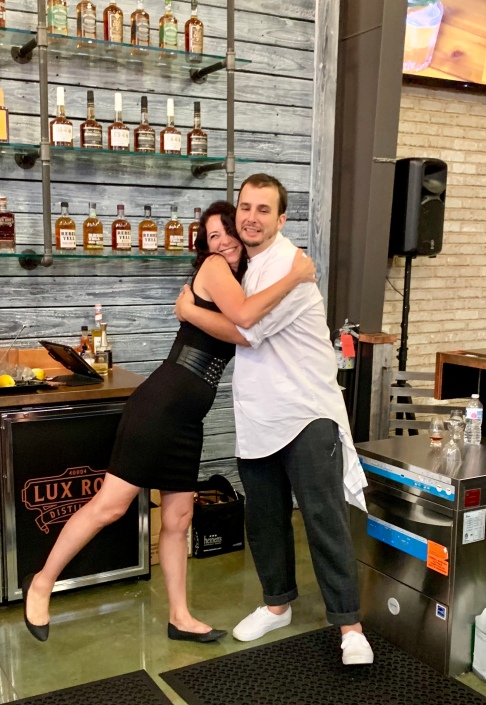