If Dr. James Crow was the father of modern bourbon, then Col. Edmund Haynes (“E. H.”) Taylor, Jr. (1830-1923) is often viewed as the father of the industrialization of bourbon-making.  Dr. Crow is largely credited with bringing his knowledge of chemistry to bourbon and with developing the sour mash process in the early 1830’s at the Old Oscar Pepper Distillery (later Labrot & Graham and now Woodford Reserve); see How Woodford Reserve got to keep the (old) name of its distillery).  In contrast, Col. Taylor came from the business and banking side of bourbon, and he acquired his first distillery on the banks of the Kentucky River in 1869.
Col. Taylor christened his distillery the “O. F. C.” (“Old Fire Copper”) Distillery and there he produced the famous O.F.C. Whiskey brand.  Later, after financial ups and downs, Col. Taylor sold his interest in O.F.C. and opened the Old Taylor Distillery with his sons in Woodford County.  The Old Taylor Distillery has been out of operation for decades now, but is reportedly up for sale; here’s a picture if you’re interested:

The O.F.C. Distillery, and the adjacent distillery built by Col. Taylor, The Carlisle Distillery, enjoyed a better fate.  They were operated by George T. Stagg, eventually became the Ancient Age Distillery, and are now Buffalo Trace.
But for my purposes, Col. Taylor also has the distinction of being one of the more litigious distillers.  While many of the well-known (and now forgotten) brands may have a trademark case or contract dispute here and there, without much trouble, I found fourteen cases involving Col. Taylor and the “Old Taylor” or “E.H. Taylor, Jr.” brands.  For the time being, I’ll stick with the most interesting series of court opinions that reveal the origin of Col. Taylor’s most distinguished trademark – his script signature: 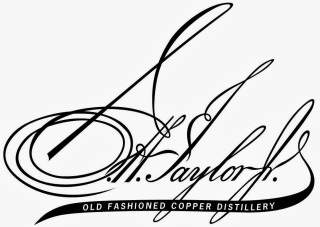 A trio of cases tells the story about this famous script signature and Col. Taylor’s contentious litigation against his former partner – the man who bailed him out of bankruptcy – George T. Stagg.  The three cases are:
·         Geo. T. Stagg Co. v. Taylor, 16 Ky.L.Rptr. 213, 95 Ky. 651, 27 S.W. 247 (1894);
·         Taylor v. Geo. T. Stagg Co., 18 Ky.L.Rptr. 680, 37 S.W. 954 (1896); and
·         Geo. T. Stagg Co. v. E.H. Taylor & Sons, 24 Ky.L.Rptr. 495, 113 Ky. 709, 68 S.W. 862 (1902).
The story begins with Col. Taylor’s financial ruin in 1877.  After buying the O.F.C. Distillery in 1869, partnering with Gaines, Berry & Co. to operate the Old Oscar Pepper Distillery (and later buying it from James Pepper when Pepper went bankrupt), Col. Taylor was forced into bankruptcy himself in May 1877.
In December 1877, George T. Stagg, a St. Louis whiskey merchant and a large creditor of Col. Taylor, bought Col. Taylor out of bankruptcy by paying 20 cents on the dollar to the creditors.  In exchange, beginning in January 1878, Stagg became the owner of the O.F.C. Distillery (which he kept and leased back to Col. Taylor) and the Old Oscar Pepper Distillery (which he sold to James Graham of Labrot & Graham).  A year later, the success of Col. Taylor and Stagg allowed them to build The Carlisle Distillery next to O.F.C., and they continued to enjoy great success.
Stagg also took measures to protect the O.F.C. trade name and the business.  He formed “E. H. Taylor, Jr. Company” in 1879 and registered the “O.F.C.” trademark.  Stagg was the president and majority shareholder of the company, and Col. Taylor was the Vice President, apparently owning just a single share.  Importantly, the trademark registrations focused on “O.F.C.” and not on the use of Col. Taylor’s name.  In time, however, the use of Col. Taylor’s name became more and more prominent, finally resulting in the use, in 1880, of the well-known script signature.
The court summarized the evolution of using Col. Taylor’s script signature on O.F.C. bourbon.  Col. Taylor (and Stagg) began by simply noting Col. Taylor’s name, as the distiller, in normal font under the O.F.C. brand name.  By 1881, they used what the court characterized as “the well-known and striking autograph signature of E. H. Taylor, Jr., with a caution to the trade that such script was the test of the genuineness of O.F.C. and Carlisle whiskies in the market.”  But did this script signature become part of a protectable trademark for Stagg?
Stagg and Col. Taylor parted ways toward the end of 1886, and effective January 1, 1887, the split was official.  Stagg retained The O.F.C. and Carlisle Distilleries, and Col. Taylor was given the J.S. Taylor Distillery (operated by one of Col. Taylor’s sons) in Woodford County, which the E. H. Taylor, Jr. Co. had acquired in 1882.
Col. Taylor immediately formed a partnership with his sons, again using his name for the name of the business:  “E. H. Taylor, Jr. & Sons.”  He renamed the distillery the “Old Taylor Distillery” and used the same script signature that he had used with his O.F.C. bourbon, except he added “& Sons,” as seen in this 1913 label:

In the meantime, Stagg, who formed the “George T. Stagg Co.” after his split with Col. Taylor, was in the process of making improvements to The O.F.C. and Carlisle Distilleries, and they remained idle for 18 months.  When Stagg resumed production in January 1889, he started using Col. Taylor’s script signature, much to Col. Taylor’s dismay.
So Col. Taylor sued Stagg on October 16, 1889, asking for an injunction to stop Stagg from using the company name of “E. H. Taylor, Jr. Co.,” from using his script signature, and for damages.  The trial court granted an injunction, and Stagg appealed.  The 1894 opinion of the Kentucky Court of Appeals partially sided with Col. Taylor, and prohibited Stagg from using the script signature on any bourbon distilled after January 1, 1887 (because Col. Taylor wasthe distiller before that date).
In answering the question of whether the script signature became a trademark owned by Stagg, the court looked into the origin of the script signature, and noted the testimony of Col. Taylor and Stagg:
Stagg says that on one occasion, when Taylor was in St. Louis, the latter noticed a striking script signature on packages of imported brandy, and was impressed with the idea that the signature of the company, as written by him, would be appropriate, and look well on a barrel.  Taylor suggested it.  Stagg agreed with him, and it was done. …  Taylor contends that it was a mere fancy with him, and was intended to show his personal identification with the distilling operations of the company.
The court then analyzed the actual trademark registration, which only emphasized “O.F.C.” as the essential feature.  The name of Col. Taylor, the court held, merely identified him as the distiller, and the court expected any subsequent distiller’s name to be substituted for that of Col. Taylor.  In fact, the court recognized that any continued use of Col. Taylor’s name as the distiller – after a time when he ceased to actually be the distiller – would have been improper.
But the court did not award any damages and it did not stop Stagg’s use of the corporate name.  Col. Taylor wasn’t satisfied with just the injunction, however.  He wanted damages, so he asked the court to reconsider its decision about damages.  In 1896, the Kentucky Court of Appeals again rejected the damages claim, and maybe in an effort to push back on Col. Taylor, the Court noted that its 1894 ruling in his favor “was with some reluctance.”
Col. Taylor remained persistent, and he continued to push the issue of damages with the lower court, where he won on the issue and was awarded damages.  Undaunted himself, Stagg appealed to the Kentucky Court of Appeals, where in 1902 – after nearly 13 years of litigation – Col. Taylor finally lost the damages issue for good.  His loss might have been predictable given the Court’s 1894 brush-back, but the history of Col. Taylor shows that persistence was certainly one of his character traits.
So even though it started as a mere “fancy,” the E. H. Taylor, Jr. script signature is now one of the most recognizable trademarks among all bourbons.  I suppose 13 years of litigation is worth 130 years (and going strong) of trade recognition.