The Duke v. Duke University – and what’s Wild Turkey got to do with this?

*Updated August 8, 2014 after Duke University filed a Motion to Dismiss in response to the Complaint, and after numerous requests to Duke Spirits and Wild Turkey for information.

Here’s an image of the planned 88-proof Kentucky Straight Bourbon Whiskey provided to the Court:

And Click here to viewa copy of the entire Complaint.

Comment below or on Twitter on whether you think “Duke” should be allowed as a bourbon brand.  In the meantime, I’m looking into why “Duke Spirits” is not registered to do business with the Kentucky Secretary of State and into the statement on the back label that Duke Bourbon has been crafted in collaboration with Jimmy and Eddie Russell (without mentioning Wild Turkey).

UPDATE
On August 7 Duke University filed a Motion to Dismiss in response to the Complaint, arguing that a lawsuit in California is improper and arguing that the lawsuit was premature.
Duke Spirits has refused to comment, despite numerous requests.  It also came to light since my original post that Duke Spirits changed its TTB-approved label (see left side of image below), which claims that the bourbon was “crafted in collaboration with legendary Master Distiller, Jimmy Russell” and later mentioned Jimmy again, along with Eddie Russell.  The label actually used by Duke Spirits omits any reference to Jimmy or Eddie Russell. 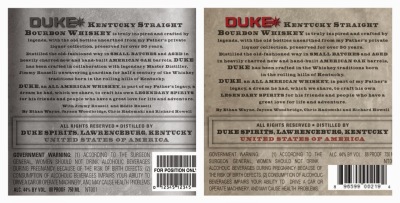 Remember, Duke Spirits claims on its Twitter profile to be “An artisan distiller crafting small batches of superior bourbon, whiskey and brandy.  Calistoga, California.”  And while the label states “Distilled by Duke Spirits, Lawrenceburg, Kentucky”, Duke Spirits is not registered to do business in Kentucky and apparently is not located in Lawrenceburg or anywhere else in Kentucky.
Wild Turkey was more forthright in responding to me, for which I’m thankful, but it claimed to be bound by a confidentiality restriction, so it could neither confirm nor deny that Duke Bourbon is really Wild Turkey (even though the cat seems to be out of the bag through the TTB-approved label).
I’ve never rooted for Duke University for anything.  I guess there’s a first time for everything.

3 Comments on “The Duke v. Duke University – and what’s Wild Turkey got to do with this?”